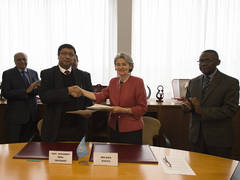 On Monday 21 November 2016, an agreement was signed by UNESCO’s Director-General, Ms Irina Bokova and the Director of the International Centre for Chemical and Biological Sciences (ICCBS), Mr Muhammad Iqbal Choudhary to establish ICCBS as UNESCO category 2 centre. The decision to place ICCBS under the auspices of UNESCO as a category 2 centre was approved during the 38th General Conference of the Organization*.
Based in Karachi, Pakistan, ICCBS is regarded asone of the developing world’s finest research and training centres at the interphase between chemical and biological sciences, conducting cutting-edge interdisciplinary research for the discovery of important chemical compounds from plants and antioxidants, as well as exploring innovative methodologies for the synthesis of novel agents and proteins used in drug discovery and biotechnology. It has amassed around 200 scientific patents to date and counts with state of the art equipment. In addition, ICCBS organizes important international conferences, symposia and workshops for participants from Pakistan and abroad on topics ranging from natural products, molecular medicine, spectroscopy, nanotechnology and computational medicinal chemistry.

Located in the premises of the University of Karachi, ICCBS is a large centre, covering more than 200 acres and comprising 12 research-laboratory complexes with some of Pakistan’s most sophisticated laboratory equipment. The foundation of ICCBS was brought about by generous private donations from the Husein Ebrahim Jamal (HEJ) Foundation, which built the Husein Ebrahim Jamal Research Institute of Chemistry in 1976 and the Dr. Panjwani Memorial Trust, which built the Panjwani Centre for Molecular Medicine and Drug Research in 2002. Over the past 47 years, more than 700 students have earned Doctorate degrees and around 1,000 Masters degrees.

The Director General expressed her appreciation of the centre, its strong south-south cooperation and of the quality of science and scientists she has met during her missions to Pakistan. She also highlighted the need for both applied and basic science.

The Ambassador of Pakistan thanked the Director General for her support of the centre and praised Prof. Att U. Rahman’s important role in creating UNESCO category 2 centre and his unrelenting support to scientific excellence world-wide, which has inspired many researchers in Pakistan and beyond.

Mr Mr Aziz Latif Jamal recalled his late father’s support for the establishment of the centre, which was the largest support of scientific research in Pakistan at the time.
Read More..