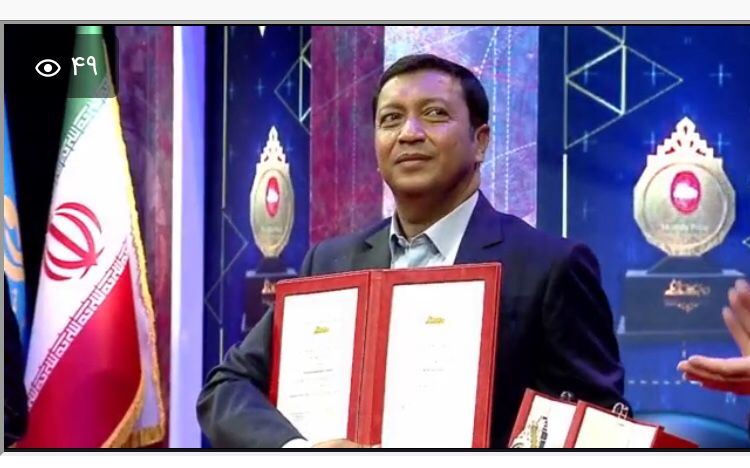 Prominent Pakistani scientist Prof. Dr. M. Iqbal Choudhary on Thursday received the 2021 Mustafa (PBUH) Prize, the prestigious prize of the Muslim World, for his services in the field of bio-organic chemistry.

In a statement, spokesman of the International Center for Chemical and Biological Sciences (ICCBS), University of Karachi on Thursday said the Mustafa (PBUH) Prize distribution ceremony was held at Tehran’s Vahdat Hall on October 21, in which Prof. Iqbal Choudhary, Director of the International Center for Chemical and Biological Sciences, and COMSTECH Coordinator General, was awarded the prize, including $500,000, a medal and a certificate.
It is pertinent to mention here that he was selected from more than 500 entrants. It was the fourth award ceremony for the biennial prize.
Addressing the ceremony, Prof. Iqbal Choudhary said, “For decades I have worked tirelessly and selflessly with the single aim of contributing to the alleviation of the suffering of people through my scientific discoveries. This award has strengthened my resolve to continue this work with sincerity of purpose and selfless motivation.”
The Mustafa (PBUH) Prize ceremony was also attended by Chairman Husein Ebrahim Jamal Foundation Mr. Aziz Latif Jamal and Chairperson Dr. Panjwani Memorial Trust Ms. Nadira Panjwani.
It is also worth mentioning here that the Mustafa Prize is regarded as the Nobel Prize of the Muslim world.
It is also worth mentioning that Prof Iqbal Choudhary is a world-renowned medicinal chemist. He has published 1,175 research papers in the fields of organic and bio-organic chemistry in international journals, 76 books, and 40 chapters in books published by major US and European press. He has secured 40 US patents so far.
Dr. Iqbal's work has been cited by researchers from around the world — 27,407 times in total — and his h-index is 70. As many as 94 local and international scholars have completed their Ph.D. degrees under his supervision so far.
Dr. Iqbal, who holds DSc, Ph.D., and CChem degrees, has been awarded by different Pakistani governments with the Hilal-e-Imtiaz, Sitara-e-Imtiaz, and Tamgha-e-Imtiaz.
He has been elected a fellow by renowned academies, including the Academy of Sciences for the Developing World, Islamic World Academy of Sciences, Pakistan Academy of Sciences, Royal Society of Chemistry, and Chemical Society of Pakistan.
Prof Iqbal has previously been honoured by the president of Iran with the Khwarizmi International Award; president of Azerbaijan with the ECO Award in Education; and the prime minister of Pakistan with COMSTECH Award in Chemistry.
He was given the prestigious title of distinguished national professor by the Higher Education Commission in 2004 and meritorious professor by the University of Karachi in 2013.

Vice Chancellor University of Karachi Prof. Dr. Khalid M. Irqai and Prof. Atta-ur Rahman, ICCBS Patron-in-chief and Chairman of Prime Minister’s Task Force on Science and Technology, congratulated him and declared his outstanding achievement as an honour not only for the University but also for the whole nation.
Award ceremony can be seen from the following weblink appended below:
https://www.instagram.com/tv/CVTVLjsgMvL/?utm_medium=copy_link